Although not strictly within the boundary of the Peak District National Park, Matlock and its close neighbour Matlock Bath are both beautiful towns with a wealth of sights and attractions to keep the whole family entertained. 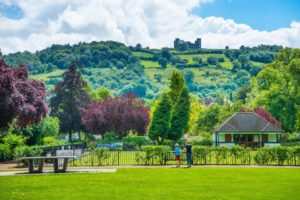 Surrounded by wooded hillsides and set on the River Derwent, Matlock is a lovely town to explore.  It has plenty of independent, quirky shops, particularly on Dale Road, as well as a wide choice of cafés, pubs and restaurants.

At its centre is the extensive Hall Leys Park, which has river walks, flower gardens, a small boating lake, tennis courts, and a great children’s play area.

Standing high on a hill overlooking Hall Leys Park and visible from most points in the town, is the Gothic-style Riber Castle (not open to the public).  Riber Castle was built in 1862 from local gritstone by the local industrialist John Smedley as his private home.

In the mid-19th Century Matlock was a booming spa town in its own right.  John Smedley established hydrotherapy in the town, and for over a hundred years Matlock was one of the country’s most celebrated centres in which people could ‘take the waters’.  Matlock’s popularity was helped by the arrival of the railway in 1849, which allowed patients to travel north from London in comfort.

Matlock Railway Station is still in use today and remains largely unaltered from its original heyday. It was designed in part by Joseph Paxton, the famed architect of Crystal Palace in London.  As well as regular train services, Matlock Station also serves the heritage steam and diesel line that runs for 4 miles from Rowsley South, operated by the volunteer railway preservation group Peak Rail.  See www.peakrail.co.uk for more information on journey details and prices.

Stretching across the steep limestone gorge between Matlock and Matlock Bath runs a cable car service that takes visitors up to the Heights of Abraham. The spectacular trip offers fabulous views of the Derwent Valley, and rises 339 metres to the top of Masson Hill.  Once at the summit, there is plenty within the Heights of Abraham estate to keep visitors occupied, including impressive show caves, a geology museum, a restaurant, an adventure playground, shops, and beautiful woodland walks.  See www.heightsofabraham.com for more information.

[…] area around Matlock and Matlock Bath is great for families, and there is loads here to keep kids of all ages […]