A day in the beautiful village of Castleton should feature in the itinerary of every visitor to the Peak District.  It is surrounded by stunning scenery, nestled in the hills at the western end of the Hope Valley, and has something to offer for everyone.

For outdoor enthusiasts Castleton is the perfect gateway to the moorland and hill trails over Kinder Scout, Mam Tor and the Great Ridge, and its many cave systems will appeal to adventurous kids of all ages.  Visitors who prefer a gentle pace of exploration will enjoy wandering through its narrow lanes, browsing the independent shops and sampling the fare in the many tea rooms, restaurants and pubs.

There has been a village here for more than 1,000 years; Castleton is mentioned in the Domesday Book of 1086.  There are a number of ancient buildings still to be found in the village, including the very pretty church of St Edmund, which dates back to the 13th Century. 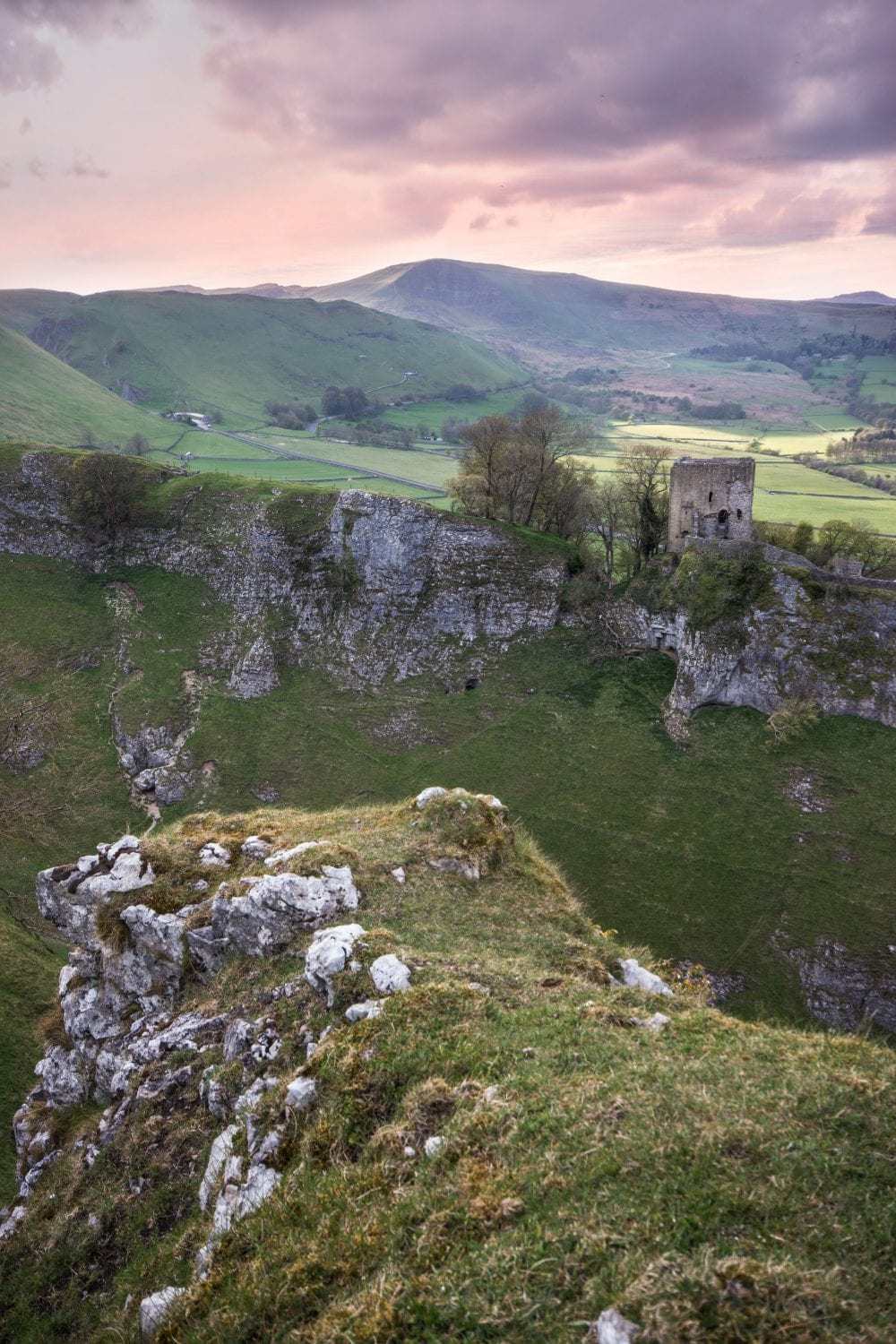 The Norman ruins of Peveril Castle overlook the village, and a walk up to the castle, although quite steep, offers visitors the chance to admire the breathtaking views.

Castleton is located on the border of the gritstone Dark Peak and the limestone White Peak areas of the Peak District, and the typical features of both landscapes can be seen in the hills that surround the village on three sides.

From almost all points in the village visitors can see the dramatic skyline of Mam Tor, the Mother Hill, or ‘Shivering Mountain’, so-called because of its propensity for landslips caused by unstable lower layers of shale.  In 1979 these regular slippages led the local council to abandon the upkeep of the road that passed beneath Mam Tor, and the ‘Broken Road’ is now something of a tourist attraction in its own right.

Despite its imposing size from the village (517m), Mam Tor is a relatively easy hill to climb, especially from the National Trust car park located off the road to Chapel en le Frith (head for postcode S33 8WA).  The views from the top are simply stunning, taking in the whole of the Hope Valley to one side and the Edale Valley to the other.

By the 17th Century Castleton thrived on the lead mining industry, and the remains of this can still be seen by visiting any of the four magnificent show caves that are open to the public in and around the village:  Peak Cavern, Speedwell Cavern, Blue John Cavern and Treak Cliff Cavern.  The latter two caves are the only places in the world where visitors can see the rare Blue John stone in situ, a semi-precious form of fluorite.  A small amount of Blue John is still mined locally and jewellery set with the mineral can be bought from some of the gift shops in the village.

Known locally by the irreverent name The Devil’s Arse, Peak Cavern is the only cave of the four that is entirely natural.  It is a short walk from the centre of the village and well-signposted.  The entrance to Peak Cavern is the largest cave entrance in Britain, standing at 60 feet high, 100 feet wide and 340 feet long.  Until as recently as 1915 it was the home of the last cave-dwellers in the UK, with a group of rope-makers living in the cave mouth and selling their wares to villagers and the lead mines.

Peak Cavern is made up of a number of chambers, each with their own natural features.  The chambers are well lit to highlight the beauty of their rock formations, and guided tours are available to help you get the most out of your visit.

From April to October Peak Cavern is open daily, 10:00am-5:00pm, with tours every hour, and from November to March at weekends, 10:00am-5.00pm.  Prices range from £9.25 for a child ticket to £11.25 for an adult ticket, with family tickets also available.  (Prices correct at time of publication.)  Please see www.peakcavern.co.uk for more details.

Speedwell Cavern was formed by miners over 200 years ago, carving tunnels out of the limestone rock with relatively primitive tools, in an ultimately fruitless search to find lead.  The Cavern features an underground canal that runs the length of the part of the cave that is accessible to the public, and visitors travel through it by boat.  Information about the history of the cave is provided during the journey, and at its conclusion visitors are able to explore a huge, cathedral-like cavern more than 200 metres underground.  It is so high that its roof can’t be seen, and so deep that the many tons of rock left over after digging the canal were able to be emptied into it without making any visible impression.  At its heart is a huge subterranean lake known as The Bottomless Pit.

Speedwell Cavern is situated at the end of Winnats Pass, just outside the main village of Castleton.  Please note that there are 106 steps between the cave entrance and the landing stage for the boat, so unfortunately this is not an accessible cave for those with mobility problems.  Speedwell Cavern is open daily, 10:00am-5.00pm from April to October, and 10:00am-4.00pm from November to March.   Prices range from £10.00 for a child ticket to £12.00 for an adult ticket, with family tickets also available.  (Prices correct at time of publication.)  See www.speedwellcavern.co.uk for more details.

Blue John Cavern is one of only two caves in the world where the semi-precious mineral Blue John stone can be found.  This beautiful, rare fluorspar contains bands of blue (sometimes purple) and yellow colours, which is believed to be how it came by its name, from the French bleu/jaune (blue/yellow).  The cave is partly formed from mine workings and partly from large, natural chambers, including the Crystallised Cavern and the Variegated Cavern.  These boast an impressive collection of stalagmites and stalactites, as well as veins of beautifully-lit Blue John stone.

Blue John Cavern is situated at the top of Winnats Pass just outside Castleton village.  It is open all year but check for opening times in low season.  Prices range from £6.00 for a child ticket to £12.00 for an adult ticket, with family tickets also available.  (Prices correct at time of publication.)  See www.bluejohn-cavern.co.uk for full details.

Arguably the most impressive collection of Blue John Stone is found in Treak Cliff Cavern.  It is designated a Site of Special Scientific Interest and its deposits are so rich that 500kgs of the mineral are still mined each year from the cave, away from the visitor routes.  Like the Blue John Cavern, Treak Cliff is made up of natural caves and those created from lead mining operations.  The visitor route takes in a number of very impressive chambers containing beautiful, well-lit formations, fossils, stalactites and stalagmites.

Treak Cliff is situated just outside Castleton village under the slopes of Mam Tor.  From March to October it is open daily, 10:00am-4:15pm, with tours every half hour, and from November to February, 10:00am-3.15pm.  Prices range from £5.30 for a child ticket to £9.95 for an adult ticket, with family tickets also available.  (Prices correct at time of publication.)  Please see www.bluejohnstone.com for more information.