The pretty village of Eyam has a great deal to offer visitors; it is in a beautiful location, has a fascinating and inspiring history, and a wealth of interesting buildings to explore.

Eyam is perhaps best known for being the site of an outbreak of the bubonic plague in the 1600s, the only area outside of London to have been struck. In 1665 a local tailor took delivery of a bundle of cloth from London which turned out to be infested with fleas.  Within only a few days the tailor’s assistant had died, and others in the household were very sick.  As more residents died over the following weeks, the community’s rector, Rev William Mompesson, persuaded the villagers to quarantine themselves to prevent the spread of disease to neighbouring areas.

This huge act of sacrifice meant that nobody left or entered Eyam for the next 14 months. During this time at least 270 of the 350 villagers died of the plague, including Rev Mompesson’s wife.  Supplies were brought in to the village and left on a boundary stone, with the money to pay for them left on the same stone in exchange.  The Boundary Stone is still standing to this day and can be seen on a short walk from the village, as are the Riley Graves, which are the graves of a family of six children and their father. 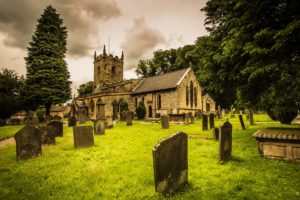 A display dedicated to the story of the plague in Eyam can also be found in the beautiful church of St Lawrence, which is located in the centre of the village. The church dates from the 14th Century, although it is believed to rest on Saxon foundations.  There is an 8th Century Anglo-Saxon stone cross in the churchyard, covered in intricate carvings, which is a Grade I listed Scheduled Ancient Monument.

A number of stone cottages in Eyam were inhabited by those who died of the plague, or managed to survive against the odds, and there are many plaques on buildings throughout the village that tell their stories.  Eyam also has a small but interesting museum dedicated to the history of the village, which is well worth a visit.  It is open Tuesday to Sunday, 10am-4pm, throughout the summer months.  Please check opening times before your visit.  A small admission fee applies.  See www.eyam-museum.org.uk for more information.

A further point of interest in the village is the beautiful Jacobean Eyam Hall, built in 1672 just after the plague ended. The hall and its lovely walled gardens are open to the public, and the old stable yard houses a number of local craft and food shops.  Eyam Hall is still owned and managed by the Wright family, who have lived there for more than eleven generations.  It is usually open on Sundays, Wednesdays and Thursdays, 11am-3pm, but please check opening times before your visit.  See www.eyamhall.net for more information.

There is a small Visitor Information Centre on the village green opposite Eyam Hall, as well as a pair of ancient stocks used for punishing villagers for minor offences.